A journalist who was attacked by a man later convicted of drugging and raping more than 100 men told HoldTheFrontPage.com how he gave up his automatic right of anonymity in order to write about his experience – to help other victims. Read more here. 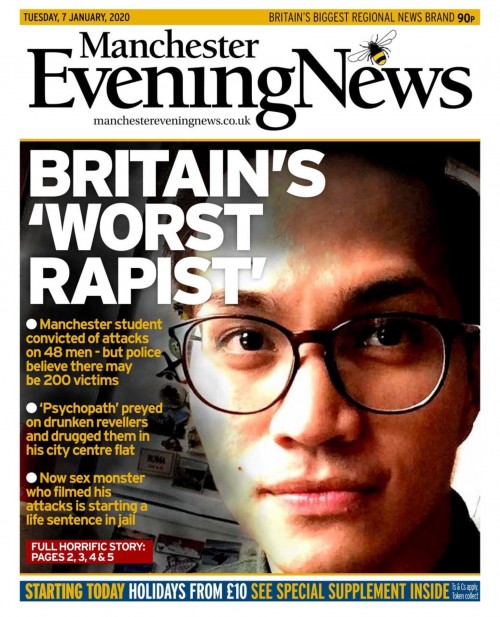 The Manchester Evening News chose not to challenge an unusual decision to extend a reporting restriction on naming rapist Reynhard Sinaga when was convicted of assaulting 48 men. He was believed to have many other victims who may not have known they had been drugged and assaulted. Police applied for restrictions to protect those unknown victims. Unusually, a decision was taken to keep the restrictions in place until sentencing, after Christmas, because “there were concerns about the availability for counselling services over the holiday period,” wrote reporter Beth Abitt. A rare case of a paper deciding suppression was in the public interest, perhaps. Read more.

Young journalists are warned they might breach a child’s anonymity by naming the school they attend. It is routine practice to avoid doing so. But in a case involving a teacher who had sex with a public, a reporter persuaded a judge that in a large school, the risk was tiny. He said there was a strong public interest in naming the teacher – and the judge agreed. But the important thing is that the reporter warned the judge in advance. Note that in other cases, judges have decided that it is the media that must decide what is safe – and face the consequences if they are wrong. Read more.

Talkradio host James Whale said he was “devastated” that listeners were upset by an interview in which he challenged a sex assault victim for not pressing her case – saying her attacker could strike again. It was seen as victim-blaming. The victim was a contributor who unexpectedly revealed she had been attacked. Ofcom said Whale’s “significant lack of sensitivity” could discourage sex offence victims from talking about their experiences. The complaint was dealt with under the Harm and Offence section of the Ofcom Code. Read more.

A rape victim “went into meltdown” when she heard her identity revealed on the BBC Asian Network, a court heard. The reporter knew she had a right to anonymity but wrongly assumed the name used in court was a pseudonym. The editor who approved the script was tried for breaching her anonymity but cleared by a judge for his “honest mistake”. But the case raises several interesting points for journalism students:

Note also that the case was heard by a judge, sitting in a magistrates’ court.

The Sun reports that producers of Coronation Street got things badly wrong when they showed an artist sketching an alleged rape victim as she gave evidence. It couldn’t happen in real life. Why would it be illegal – on two counts? Check your answers here

A couple who were filmed from a police helicopter, having sex on their patio, should be regarded as victims of voyeurism and entitled to lifelong anonymity, warned the legal team prosecuting the officer who shot the footage. A local editor declined to publish screen grabs despite “lively debate” among colleagues. Read more.

Coverage in the Daily Star was less coy.

However, the judge in the case said it was for editors to decide whether they were actually victims of a sex offence, given they knew they were being filmed. Those who published would risk prosecution. The couple refused to give evidence, meaning they were not entitled to protection as witnesses in the case. Read more

Victims of sex abuse have anonymity for life, even if the abuse is not proved in court – unless they choose to go public. Very rarely, it does happen, but as The Argus newspaper says, it is delicate to negotiate and care must be taken to protect other people. Read more

People who allege they have been illegally forced into marriage will have lifelong anonymity from the moment of making the allegation under a new Bill, reports Press Gazette. Over-16s can waive their right in writing. Read more

Media law matters (and so do ethics)
Blog at WordPress.com.